The following piece is written by students in the Conservation Biology Lab who are taking part in developing that plan. This is the first post in a series.

-----
When people walk through the Rice University campus they might appreciate the shade of one of the 2,000 live oaks while their dogs or children play in the grass. This place of study and research provides an important resource of greenspace for the surrounding Houston community. But what may go overlooked is the biodiversity that the campus holds. 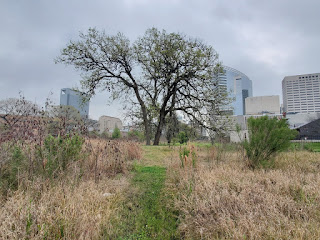 The Conservation Biology Lab class at Rice is bringing biodiversity and the importance of preserving wildlife in an urban setting to center stage. They have been tasked with creating a Habitat Conservation Plan for the campus to ensure Rice protects its biodiversity for years to come.

For one portion of the project, we are designating 15 acres of the campus as critical habitat. Critical habitat is a geographical area that is essential for the conservation of a species. Using data from the iNaturalist app, we identified areas of campus that currently harbor a high level of biodiversity, such as the Harris Gully Natural Area seen here. Additionally, we determined areas with high potential for biodiversity by looking at their current functions such as water retention and pollinator habitat.

By assigning these areas as critical habitat, we are proposing restrictions as to what the university can and cannot do within them. Preventing actions such as development and over-mowing can have a large impact on the success of a species. For example, the northeast side of campus provides a large understory area for many bird species. Designating this area as critical habitat would prevent the university from ever potentially clearing that area for development, and will ensure this ideal bird habitat will remain intact on campus.
Other portions of the project include specific conservation actions within the critical habitat areas to support specific taxa including birds, amphibians, pollinators, and native plants, as well as calculating the impact of these projects on Rice’s goal to be carbon neutral by 2038. The Houston Audubon was a key resource in developing our Habitat Conservation Plan, providing bird-friendly recommendations as well as a native plant list. 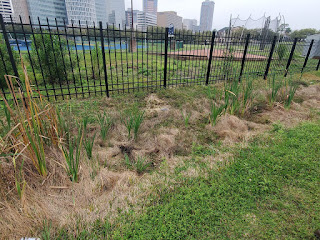 Urban conservation is becoming increasingly important as cities expand, which makes projects such as these crucial to the well-being of our environment. Even areas in the middle of Houston have the potential to support high biodiversity and we hope this project will set a precedent for the rest of Houston to encourage action in protecting small pockets of land even within the city!
We were surprised by some of the areas that our analysis identified, such as a neglected ditch shown below that supports the highest insect diversity on campus.

This goes to show that any area has the potential to support important species, and that small protected areas can accumulate to a large impact.

So what can you do at home to support critical habitats?
Authors:
Jessica Alanis and Ellen McMullen are seniors at Rice University. Jessica is studying environmental science and Ellen is studying bioengineering and ecology & evolutionary biology. They undertook this project as a part of Dr. Cassidy Johnson’s Conservation Biology Lab class in the Rice University BioSciences Department.

February 12, 2020
We know that Houston is a vital city for birds, but now it’s official . Houston Audubon’s Conservation Team worked tirelessly in partnership with Houston Parks and Recreation Department (HPARD) Natural Resources Program to submit the application, and it paid off. Houston was honored as one of the first four cities to receive the Bird City Texas certification – an inaugural program by Audubon Texas and Texas Parks and Wildlife Department (TPWD). So, what exactly does being a Bird City mean? The big picture is that we have demonstrated that our community cares about birds, habitat, and conservation. The growing popularity of planting native plants, restoring prairies, bird-friendly education programs, and the Houston Lights Out for Birds program to reduce collisions for migrating birds were among the many efforts and programs that got us this designation. ( Go Houstonians! ) I personally witnessed the large amount of work that went into this application and was curious about
Post a Comment
Read more