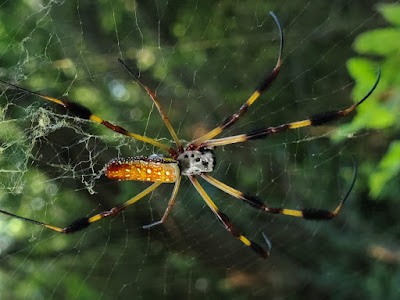 The peak of the summer heat is waning and fall migration is right around the corner. Our High Island sanctuaries are open, and while little can compare to a spring fallout, we still see good numbers and diversity of migrants during September and October. It’s also the time of year we receive a few reports from visitors who were stopped in their tracks and unable to continue on because of an unsuspecting, nightmarish scene along the trails, particularly in Smith Oaks Sanctuary. Like a scene from the movie Arachnophobia, the golden silk orb-weaver (Trichonephila clavipes) is prominent and ominously displayed throughout High Island during this time of year. 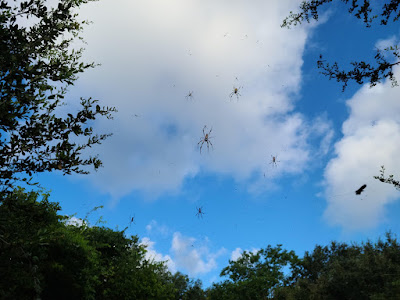 While most people have their binoculars scanning the trees during Spring, a trained eye can notice one of High Island’s most notorious residents emerging from egg sacs laid by mature adults the previous year and taking up position along the trails. Juvenile golden silk orb-weavers are small and easily overlooked in the spring, hatching in response to warming weather conditions. By August, and just in time for fall visitors during migration, the diminutive juveniles have reached maturity with the female’s body length measuring over 1.5 inches, and a leg span of nearly 5 inches! Males are much smaller, less than 0.5 inches, and usually found lurking nearby females in the same web. The females construct the webs upwards of 6 feet in diameter with yellow tinged silk that has a tensile strength stronger than steel and capable of immobilizing insects as big as Cicadas and small birds! Staff once witnessed a Blue-gray Gnatcatcher which had become entangled in an orb-weaver web. The Gnatcatcher was much too big for the orb-weaver to handle and was removed from the web and released unscathed. 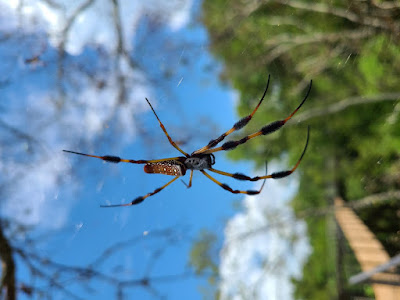 Sheathed in bright yellow and orange with silvery spots contrasting against jet black, bristly leg joints, and an elongated abdomen for which they are aptly nicknamed the banana spider because of its shape, are enough to send shivers down anyone’s spine. However, despite their formidable appearance, these spiders are quite docile. They are not prone to bite unless forcibly handled. Even if they do, the bite has been likened to less than that of a bee sting. Staff members encounter these spiders on a daily basis and have never been bitten. Sure, the sudden tickle on the back your neck, a face full of spider web, or the realization that one of these giant spindly beauties has fancied you for a tree, can send you into convulsion-like, matrix-movie style theatrics to dislodge the unexpected hitch hiker. In reality, it’s just an innocent case of mistaken identity, and the only one really in danger was the spider.

Our trail systems are the perfect open locations for these 8 legged creatures to build their home. A point worth reiterating - this is their home and we are the visitors.  When birding this fall, we recommend you pick up a “spider stick” along the way and gently brush aside any webs that might cross your path. These spiders have been known to rebuild parts of their web every single day, and have been observed restringing across a trail in less than an hour, so efforts to manually clear trails of spider webs daily just isn’t feasible. Some of the early migrants have already made an appearance in High Island, and we hope to see you on the trails this fall, spider stick in hand… Happy fall birding!