From Avian Absence to Bountiful Bird Haven: How One Yard Finally Got It Right 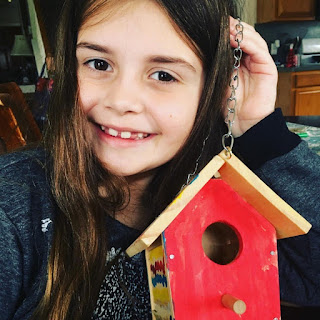 On Christmas Day 2018, my 7 year-old daughter joyfully opened a gift we had both long-awaited, that of a DIY birdhouse kit. I had envisioned a project we could complete together, one that would develop her budding interest in bird watching and give us something to do during the cold winter days ahead.

Indeed, after applying a haphazard coat of brightly-hued paints - as only a first-grader can do - twisting in the tiny screws on every corner of the aviary abode, we hung 3 bird houses from our live oaks in the front yard. With noses pressed against the living room window, we eagerly anticipated a flurry of feathers and happy chirps.

Yet, surprisingly, no birds arrived.

A week went by, then a month, soon migrating flocks returned north and not one bird took an interest in the houses. Not a parent to shrug off a child’s genuine interest or attempt, I began wondering what could have gone wrong.

I attempted to solve the problem with a trip to our local retail chain hardware garden center. We loaded up on bird seed, a feeder, and more than a few bright and perky flowers- all with exotic names, various ‘varieties,’ a multitudinous spectrum of wild pigments sure to attract the many bugs which birds needed. 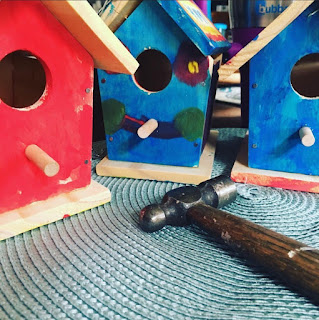 After a day of scrubbing the bird bath, planting our Australian begonias, Madagascar periwinkles, and South American petunias we followed up with our annual ritual of weed n’ feed herbicide and sprayed pesticides for mosquitos. Summer was coming after all.

We finally arrived at a point where we were confident we’d soon host a yard full of birds, insects and other suburban wildlife. Our yard had reached the apex of HOA-standard beauty and people noticed, commenting on its order and neatness among the rainbow of flowers.

Still, no birds arrived. Not even bugs.

Worse, our birdhouses were hosting squatters. Full of uninvited wasps and lizards the houses were now attracting pests and vermin. It was as if after all the effort and good intentions, our yard was being ignored. Avoided even.

We weren’t just missing birds, either. I couldn’t recall the last time I’d seen a bee in my yard, much less a group of moths mindlessly pounding their heads into my porch light or even scraping bug guts from my truck’s windshield. Something was off. Seriously.

After some internet research and reading and a trip to our local library, my daughter and I learned that what we thought we had created – a haven for birds, pollinators and wildlife – was more of a wasteland.

In reality, our yard was being ignored by birds. We had created a place to be avoided at all costs- because we were actually harming birds, bees, pollinators and wildlife.

This was shocking to us – never, ever had we wanted to create a yard that harmed the environment. We were conscientious people.  We reduced, we reused, we recycled, we bought clothes second-hand. We weren’t those people who didn’t care.

Where had we gone wrong? 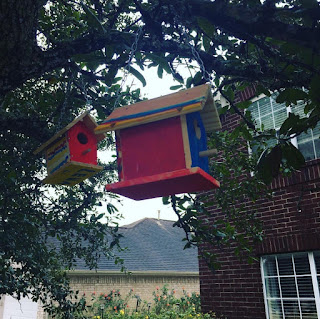 Our obvious first mistake was the use of pesticides and I knew from college science classes that pesticides used on insects eaten by birds could weaken their egg shells and remain in their body tissues. But if we didn’t spray, wouldn’t the mosquitos become a nuisance? Actually, no. The few mosquitos we encountered were easily avoided with a well-placed citronella plant, neighborhood bats, and a healthy slap every now and then.

Another mistake was our weed n’ feed which we thought was necessary to maintain a healthy, green lawn. Some of the granules are eaten by birds, harming them and their young.  We learned that herbicides actually disrupt a bee’s ability to return to the hive – causing colony collapse disorder.

Even our vivid flowers from the hardware store nursery had been propagated in such a way to discourage insects from pollinating and eating them. They were also covered in pesticides before hitting the sales floor of the garden center patio – only meant to be ornamental, they would never host insects like we had hoped.

We discovered that many of our ornamental bushes – planted by well-meaning suburban developers- were from Indonesia and our beautiful crepe myrtle was native to China. Literally nothing besides our oaks supported native Texas birds, bees or pollinators.

Since birds feed their babies insects exclusively, no bird would ever nest in our birdhouses without providing the native plants that support insect lifecycles.

By the next year, I had read a book that would forever change how I viewed and treated my yard, Nature’s Best Hope by Doug Tallamy. Quickly, I learned that nearly everything I was doing to attract birds was essentially repelling them.

And my orderly, leafless yard? Between the leaf blowers and mulching, we had effectively chopped and removed all the wintering moth cocoons and put them in the landfill – all in a tidy, clear bag approved by the city and HOA.

We had created a beautifully lifeless yard.

We read about ways to save our declining insects and birds like turning off lights at night to save moths and help migrating birds and wildlife. We learned to leave the leaves over fall giving bees and insects a place to winter and hibernate.

We ripped out our non-native plants in order to promote native Texas birds, bees, wildlife and in just one year, have seen more bird species, insects, amphibians, and other suburban wildlife than we have since we first moved here in 2011.

Gone are the decorative yet barren flowers and in their place, a diverse offering of native plants such as Bluebonnets, Turk’s cap, Black-Eyed Susan, Indian Blankets, Purple Coneflower, Serviceberry, Yupon Holly, and native milkweeds.

Now, we regularly see Black-capped Chickadees, House Finches, Doves and Pine Siskins in our oaks. That is of course, if the Eastern Gray Squirrels and Mockingbirds don’t chase them away from the feeders. We have two small hives of nesting underground bees (one in the front yard and another in the back.) Even short migrating birds such as American Robins, Cedar Waxwings and Ruby-crowned Kinglets fly through and stop at one of our feeder stations.

We have so many bird visitors we’ve even caught sight of a Red-tailed Hawk at the birdbath. 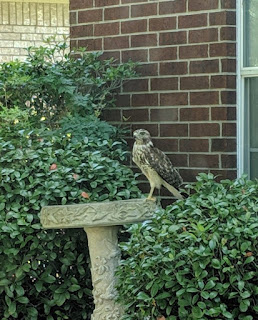 Last summer, my daughter and I watched a flock of migrating Mississippi Kites get harassed by our resident vagrant Chihuahua Ravens that live in the pines behind our house. We also have a yard full of bugs – and while I expected mosquitos, fleas or worse to come roaring back, they have not after 2 years of being pesticide-free.


The bird houses are still empty and the eye-popping paint has long faded. They remain filled with wasps and lizards – or rather, “bird food” as we call them now. But, to our pleasant surprise, the trees are often busy with all kinds of wildlife, and best of all, home to several nests. Those are houses we are proud to host knowing we will have what they need in order to call our yard their home.

Interested in planting Texas native plants to support native Texas birds and pollinators? Check out these websites to get started:

Kristy Loye Key is a teacher, a writer, a mother and a friend to the natural world. A graduate of Rice University and a member of the Houston Audubon, she calls Galveston County home. You can catch her bird watching adventures along the #greattexascoastalbirdingtrail on IG @texasbirdwatcher

Pine Siskins and Salmonellosis - How to Identify and Prevent the Spread

March 05, 2021
Backyards across the United States have had an unusually high number of small, heavily striped finches, known as Pine Siskins, making a recent appearance. This year’s irruption of Pine Siskins has been one of the largest in recorded history! An irruption typically occurs during periods of food shortage in a species’ home range, causing them to spread out southward in search of resources. Pine Siskins, whose range is typically limited to the boreal forests of Canada and the northernmost U.S. states, faced an extreme shortage of conifer seeds, resulting in their takeover of bird feeders in a yard near you! Learn more about the irruption. Unfortunately, these birds are facing yet another threat across their irruption range. Salmonellosis outbreaks in Pine Siskins have been documented heavily in the Pacific Northwest, resulting in mass die-offs of this species and others that use feeders alongside them. This disease has now, unfortunately, made its way to Texas.  Salmonellosis is caused by
Post a Comment
Read more